Overlooked water loss in plants could throw off climate models

In dry conditions, leaves might lose more water through their outer surfaces than scientists suspected. Videvo/CC BY 3.0

“If you’re trying to understand why a crop you’re growing or a particular plant is able to survive and do better under drier conditions, you may misinterpret that,” says plant physiologist David Hanson of the University of New Mexico in Albuquerque. Hanson presented his findings at the annual meeting of the American Society of Plant Biologists in Honolulu, Hawaii, on 25 June.

Researchers have long assumed that the main way that plants lose water is through leaf pores called stomata. When water is abundant, the stomata open wide to let carbon dioxide flow in — maximizing photosynthesis, but allowing water to exit. Plants also lose moisture through a leaf’s waxy outer surface, or cuticle, but this effect has been considered negligible.

This understanding, in turn, has shaped how scientists extrapolate the flow of CO2 into a leaf. Measuring CO2 inside a leaf requires cumbersome, custom-made equipment, so researchers in the field often use measures of water loss and other factors to calculate the concentration of CO2 inside. Once they have estimated the internal CO2 concentration, researchers can calculate how efficiently the plant is converting the gas into food — a component of primary productivity, a measure that is an important factor in some climate models.

But such calculations are based on water loss through stomata, and disregard the water vapour that passes directly through the cuticle. Hanson’s experiments suggest that this is a workable approximation when water is plentiful — but when it is scarce, and the stomata close, a greater proportion of moisture is lost through the cuticle. Failing to adjust for this could throw off calculations of how well plants convert CO2 to sugars during photosynthesis, Hanson says. “While stomata are closed, this small error is now a massive error,” he adds. 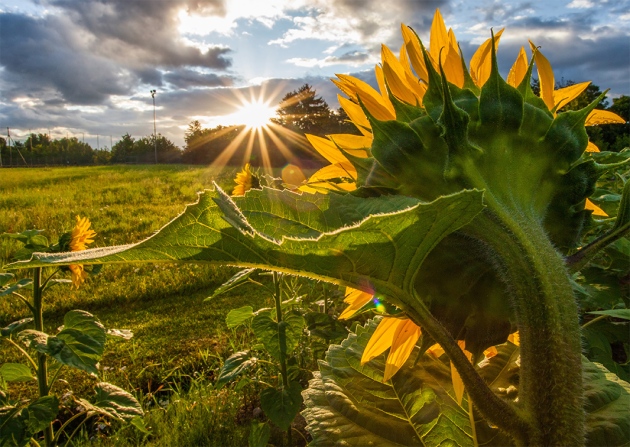 Plant leaves have pores called stomata to take up carbon dioxide and allow water to exit.

Hanson first became aware of this in 2015, when plant physiologist John Boyer of the University of Missouri in Columbia approached him after a seminar. Hanson had just presented data showing his attempts to explain how properties of leaf cells can limit CO2 capture. Boyer offered Hanson an alternative explanation — water loss through the cuticle — and described data that his lab had collected in the 1980s, but that had garnered little attention.

Boyer’s team had found that water loss through the cuticle skewed calculations of CO2 concentrations inside sunflower leaves to be 15% too high when water was abundant and stomata were open (J. S. Boyer J. Exp. Bot. 66, 2625–2633; 2015, and D. T. Hanson et al. J. Exp. Bot. 67, 3027–3039; 2016). And when stomata were closed, predicted CO2 concentrations were six times higher than direct measurements taken inside the leaf.

“Within six months or so of that talk, I started doing my first measures and said, ‘OK, yes, this is a problem’,” says Hanson. He is now working to simplify those measurements so that more labs can follow suit.

Until that happens, measurement errors could be affecting more than just individual lab experiments, says Boyer. “The carbon dioxide inside the leaf is a central feature of climate models and our understanding of how photosynthesis works,” he says.

It is an intriguing issue, says Donald Ort, a plant physiologist at the University of Illinois at Urbana-Champaign. Ort suspects that water loss through the cuticle will be important only under conditions of extreme drought. “I don’t see that it would be something that would impact how we’re estimating global primary productivity, or have any consequence on breeding plants for greater yield,” he says.

But Hanson says that in his unpublished studies of rapeseed (Brassica napus), a crop harvested for its oil, he found that measurements that did not account for the water lost through the cuticle overestimated water loss through the stomata by an average of 12.6%, even when the plants were well watered.

Even mild drought could be enough to affect water-use measurements, agrees Susanne von Caemmerer, a plant physiologist at the Australian National University in Canberra. “We have models that try to capture global carbon dioxide uptake and water loss,” she says. “That’s where this is really going to matter.”