Honey Bee Research at the University of Illinois

Research Areas: From Society to Genes

My research group uses the Western honey bee, Apis mellifera, to understand the evolution and mechanisms of social behavior. Among the species of animals most attuned to their social environment are the social insects, which include the honey bee. They live in societies that rival our own in complexity and internal cohesion.

Social insects are "eusocial,” which is the most extreme form of animal social life on the planet. Bees and other eusocial insects (like ants, termites, and wasps) live in colonies with overlapping generations, cooperative brood care, and a reproductive division of labor. The queen reproduces, while the workers perform tasks related to colony growth and development and engage in little, if any, reproduction themselves.

Advanced eusocial species such as honey bees have the largest colonies, numbering tens or even hundreds of thousands of workers. They also live in the most complex societies, highlighted by an intricate division of labor among workers. It is this division of labor that has made possible the evolution of traits normally associated with human society: agriculture, warfare, and symbolic language.

Social insects are "extremists" in their constant expression of social behavior. They coordinate virtually all of their activities with other individuals to ensure colony survival. Like all other animal, bees must obtain and process information about their changing ecological and social milieu and act accordingly. But for species with active social lives, neural and behavioral plasticity is even more contingent upon social context. In social evolution, the sophistication of behavioral mechanisms for the essentials of life--food, shelter, and reproduction--stems from increased abilities to communicate and synchronize behavior with conspecifics. Social insects, especially honey bees, are exemplars for the discovery of general principles of brain function, behavior, and social organization.

Our goal is to explain how honey bee society evolved and operates using an approach that integrates evolutionary biology, behavioral biology, neuroscience, endocrinology, molecular biology, and genomics.  We seek to understand the function and evolution of behavioral and pheromonal mechanisms that integrate the activity of individuals in a society, the neurochemical, neuroanatomical, and neuroendocrine mechanisms that regulate behavior within the brain of the individual, and genes that influence social behavior, and the means by which the environment acts on the genome to orchestrate plasticity. We study the most fundamental social behavior system in the honey bee colony, the division of labor among worker bees. We also investigate other behaviors, including dance language, colony defense and reproductive behavior in the usually sterile workers. Members of our lab often develop new tools to facilitate this research, such as automated methods to track bee behavior (such as the RFID tag system depicted below) and automated methods of rearing bees in the laboratory.

Especially in the current social and political climate, we are mindful of the broader societal issues related to understanding the relationship between genes and behavior. We strive to show how our work illustrates that the relationship between genes and behavior is dynamic and environmentally responsive, rather than purely deterministic. Our comparative genomics research also indicates that this conclusion holds for humans as well as bees. 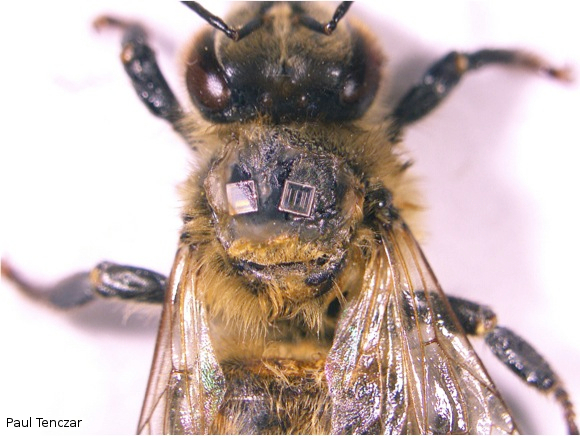 Honey bee colonies feature an age-related division of labor. This is based on the behavioral development of the individual worker bee. Behavioral development occurs in many animals, including humans. As animals age and pass through different life stages, their genetically determined behavioral responses to environmental and social stimuli change in predictable ways. Often these responses increase in complexity and involve learning. During just a 4-7 week adult lifespan, worker honey bees display a rich, vertebrate-like pattern of behavioral development, which underlies age-related division of labor in the bee colony.

Bees undergo a series of behavioral transitions. They start out in life working in the hive, caring for the brood, building and maintaining their honeycombs, and processing and storing their food, and finally switch to becoming a forager. Foraging is a complex task that requires learning how to navigate in the environment and handle flowers.

Behavioral development in the bee is a powerful system for integrated analysis; although it occurs naturally in the field, some underlying mechanisms also are readily analyzable in the laboratory. Moreover, owing to the bee's special status as a producer of honey and the premier animal pollinator, it has been closely associated with human beings for millennia. As a result, we know more about honey bees than just about any other animal on earth. One consequence of this wealth of knowledge is that the natural social life of the honey bee, though as complex as in any vertebrate society, can be extensively manipulated with unparalleled precision.

Bees show very structured behavioral development, but they also show a lot of flexibility. They speed up, slow down, or even reversing their trajectories in response to the needs of their colony. How do they do it? Our research, much of it conducted in collaboration with the lab of Dr. Yves LeConte in France, has demonstrated that how fast a bee grows up and becomes a forager is regulated with exquisite complexity, and it depends greatly on chemical communication. We have identified several pheromones that are involved, including a newly discovered pheromone produced by older bees that inhibits behavioral development in younger bees. Genomic analyses have revealed that these pheromones work by regulating brain gene expression.

How does a bee's brain support the striking changes in behavior that take place during maturation? One part of the answer lies in the mushroom bodies, a brain region that is the center of learning and memory in insects. Together with the laboratory of Prof. Susan Fahrbach, formerly at Illinois and now at Wake Forest University, we discovered about a 20% increase in the volume of a specific area of the mushroom bodies as worker bees mature. This volume increase occurs in a mushroom-body subregion where synapses (connections) are made between neurons from other brain regions that are devoted to sensory input. This was the first report of such brain plasticity in an invertebrate! It was particularly exciting because volume increases in brain regions in vertebrates reflect increases in certain cognitive abilities. The increase in the mushroom bodies might be learning-related.

The honey bee is the only non-mammal to have a symbolic language; honey bee dance language shatters our perception of what an insect brain can accomplish and provides a great challenge to discovering how a small brain can generate complex behavior. We use neurochemical and new genomic tools developed in our laboratory and the recently completed honey bee genome to help in this quest. One early breakthrough was the discovery that cocaine, acting on endogenous octopamine pathways, makes bees dance more!

Social insects live in extraordinarily complex and cohesive societies, where many individuals sacrifice their personal reproduction to become helpers in the colony. Identifying adaptive molecular changes involved in eusocial evolution in insects is important for understanding the mechanisms underlying transitions from solitary to social living, and the maintenance and elaboration of social life. We develop large-scale genomic resources to address these issues, in wasps and bees. These resources include brain transcriptomes and whole genomes. Drawing from whole genome comparisons, candidate gene approaches, and a genome-scale, comparative analysis of protein-coding sequence, we have made novel discoveries related to several major biological processes, including chemical signaling, brain development and function, reproduction, and metabolism and nutrition. Working with the Beijing Genome Institute we sequenced and analyzed genomes for 10 species that show different levels of sociality, and found evidence that gene regulatory networks have become more complex during social evolution.