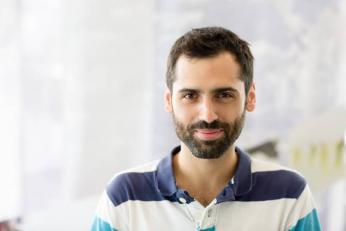 Ph.D in Agronomy and Bioengineering (2018) at the University of Liege-Gembloux Agro-Bio Tech, Belgium

Msc in Agricultural Bioengineering (2013) at the University of Liege-Gembloux Agro-Bio Tech, Belgium

With the forcasted increase of world population from 7 billion to 9.7 billion by 2050 (UN, World Population Prospects: The 2015 Revision) and the increasing demand of bioenergy, the agricultural sector is facing the challenge to roughly double its production in order to meet the demand of agricultural products. Increasing photosynthesis capacity is often cited as one of the prime targets to increase crop yield. Current research focuses on the influence of canopy architecture on carbon assimilation at the canopy scale. Although biomass production may intuitively be thought of as a function of leaf photosynthetic activity, this relation was shown to be more complex. Indeed, the photosynthetic rate inside the canopy is not homogenous because of the heterogeneities of microclimatic factors. One of the most obvious illustrations is the vertical gradient of light intensity within the canopy where sunlit leaves at the top of the canopy intercept more light than shaded leaves at the bottom of the canopy. Light saturation of photosynthesis at the canopy level can be very different from the saturation observed at the leaf scale (Zhu et al., Current Opinion in Plant Biology 2012) and temperature optima of photosynthesis at leaf and canopy scales can also differ by several degrees (Körner et al., The Journal of Horticultural Science and Biotechnology 2009). Therefore, both leaf and canopy-level photosynthesis need to be considered in strategies to improve canopy carbon gain. To begin to address this research need, we investigated the natural variation in canopy architectural traits and photosynthesis in Glycine max (L.) Merr. (soybean) and Vigna unguiculata (L.) Walp. (cowpea) which are important food and feed crops.

This research is part of the Realizing Increased Photosynthetic Efficiency (RIPE) framework which is an international research project formed in 2012, funded by the Bill and Melinda Gates Foundation, the Foundation for Food and Agriculture Research, and the U.K. Department for International Development.