By 2050, atmospheric carbon dioxide concentration is expected to exceed 450 ppm, a change that will directly impact C3 crop photosynthesis, yield, water/nutrient use, and water/nutrient use efficiency. FACE experiments with C3 crops have shown that on average elevated carbon dioxide increases photosynthesis, reduces stomatal conductance and increases economic yields. Our recent studies have also established that there is significant variation in CO2 response within soybean, and we are developing populations for quantitative genetic approaches to identify markers or even genes associated with maximal and consistent gains in yield at elevated CO2.

This project couples the unique capabilities of Free Air Concentration Enrichment (FACE) technology, which provides controlled elevation of ozone concentrations in open-air at field scale, with the genetic resources in maize and next generation sequencing. Research will provide a foundation for crop improvement by (i) quantifying genetic variation in response to elevated ozone among diverse inbred and hybrid maize lines in the field; (ii) using high-throughput phenotyping of ozone impacts on maize growth, senescence, leaf metabolism and reproductive processes, to identify traits that correlate with yield loss; (iii) identifying the genes and gene networks underpinning the ozone response in the most extreme tolerant and susceptible lines, and their hybrids, by integrating RNA-seq expression analysis and detailed physiological analysis in inbred and hybrid maize; (iv) developing, or identifying existing, biparental populations derived from tolerant and sensitive parents to identify QTLs and eQTLs for ozone tolerance; and (v) assessing crosstalk between ozone and biotic stress response gene networks in maize.

A successful bioenergy industry will require high productivity and yield stability of bioenergy feedstocks. Ozone is the most damaging air pollutant to vegetation today, and is estimated to cost up to 10% of maize yields in the US. It is unknown how today's and tomorrow's bioenergy crops, including sorghum, miscanthus, switchgrass and sugarcane, will tolerante ozone stress, but given their close phyologenetic relationship with maize, they may be equally sensitive. This research, associated with the Center for Advanced Bioenergy & Bioproducts Innovation (CABBI) will investigate ozone sensitivity in future bioenergy crops, initially focusing on sorghum.

Genetic Variation in Canopy Architecture and Photosynthesis in Soybean & Cowpea

Canopy architecture varies widely among diverse genotypes of soybean and cowpea, and can alter the light environment and photosynthetic capacity of leaves as well as the source-sink balance of crops. Thus, architecture traits have been indirect targets of selection as breeders have selected for greater yields. This research, associated with the Realizing Improvements in Photosynthetic Efficiency (RIPE) project, will use USDA collections of soybean and cowpea to describe variation in architectural traits, and their relationship with photosynthesis and yield. 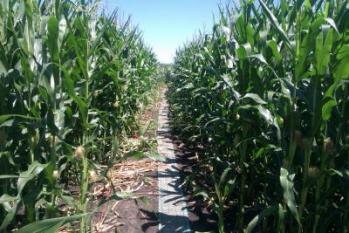 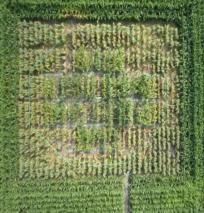