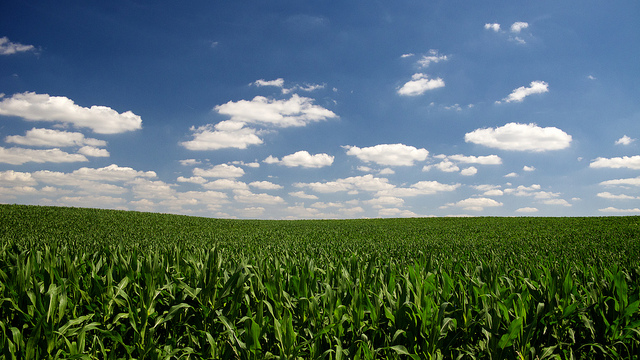 Throughout the growing season seemingly benign clouds pass over millions of acres of crops and inadvertently rob plants of their productivity, costing untold bushels of potential yield. Researchers recently reported in the journal Science that they have engineered a solution and increased the productivity of a crop in the field by 14- 20 percent - they believe this fix could be applied to staple food crops to help meet future global food demands.

When it's too bright outside, you put on your sunglasses. Return to the shade, and you can quickly take them off. Plants have evolved their own sun protection, called photoprotection, which leaves turn on in full-sun and turn off when shaded by a cloud or another leaf. Without this process, full sunlight would cause oxidation and bleach the leaves - the plant equivalent to a severe sunburn.

Unlike you, it can take minutes or hours for the plant to remove its sunglasses and return to photosynthesizing- turning light into yield - at maximum capacity. During this time, the plant siphons off much of the light energy as heat, yet it could have used this energy to make more plant mass. Researchers predicted that this costs plants 7.5-40 percent of their yield, depending on the type of plant and temperature.

Steve Long, Gutgsell Endowed Professor of Plant Biology and Crop Sciences at the University of Illinois, teamed up with Krishna Niyogi, a professor at the University of California, Berkeley, to boost the levels of three proteins and speed up plant recovery from photoprotection. Their modified plants proved 14-20 percent more productive than unaltered plants in replicated field tests.

Postdoctoral researchers Katarzyna Glowacka and Johannes Kromdijk in Long's lab conducted this study using tobacco because it is easy to genetically modify, yet it is a real crop that serves as a good proxy for food crops that are much harder to genetically engineer. By growing tobacco in field trials, they could study how the plants respond in the real world with uncontrolled variables, such as sunlight, clouds, and rain. They have no intention of using this "improved" tobacco beyond these experiments; it was simply a test bed to see if the technology worked.

Now that they know it does, they are embarking on the harder task of transferring this to important food crops - rice, cassava, and cowpea. More human calories are derived from rice than any other crop worldwide. Rice produces 176,000 calories/hectare/day while cassava produces more than 250,000. These crops are especially important to smallholder farmers in Sub-Saharan Africa and Southeast Asia who need to produce more food to provide for their families and communities.

Will it work? The process that was modified in tobacco is similar to that used by all crops, so the researchers have every reason to expect that it will. The Bill & Melinda Gates Foundation, which funded this work, will help ensure that this technology reaches these farmers at a low cost.

Today, we have a seeming abundance of food, so why do we need to bother trying to make more? Long points out that with regulatory hurdles, testing, and multiplication, it will take 15 to 20 years at minimum to get these findings from their lab and into farmers' fields at scale. Meanwhile, by 2050, we are going to need to produce 70% more food than we are today according to the United Nations Food and Agriculture Organization. David Tillman, Regents Professor and McKnight Presidential Chair in Ecology at the University of Minnesota, suggests that it's actually more like 100% more food. This lag between discovery and deployment means we are just one crop breeding cycle away from starvation. We therefore need to be innovating now for our future.

But this study is promising. It shows that we may meet this impending demand - and in a way that many scientists once doubted: tweaking photosynthetic mechanisms to increase yield was once considered the holy grail of plant biology. Now it might be our best moment to usher in the next green revolution and meet the food demands of the 21st century.